The Bohemian Grove is a "resort" located in the giant redwood forrest in Monte Rio,California. All of the "Elite" (Businessmen,Bankers,Journalists,Politicians,"Stars"and Presidents) meet there during July of every year to worship a 30-40 foot owl "god" they call "Molech". Before you pass me off as "Crazy".I'll be the first to admit that I am crazy! "Crazy like a FOX" and "Wise as an OWL"! (To Christ go all the glory,honor,and praise)...
Let me remind you that "Molech" is not only mentioned in the bible (Leviticus 18:21,20:1-5) They (Those who partake in the rituals at Bohemian Grove) even admit to it in there own annuls,journals,and books.It's been talked about in the "New York Times","The Sanfranciso Chronicle"(among many other "respectable" news outlits) and is even listed on "Wikipedia" (The free online encyclopedia) under "Bohemian Grove".

UPDATE! (These clips have been REMOVED by YouTube due to pressure from some of these powerful "Elites" after Michael Reagan threatened to have Mark Dice and "911 Truthers" MURDERED! THEY don't want this story to get "Out There"!.Please visit www.theresistancemanifesto.com to hear these clips in their entirety.Scroll down to the bottom of that page and listen to them ALL "Shill" for the NWO!)...


Notice how Sean Hannity first admits to being "VERY AWARE" of Bohemian Grove,and yet his own partner Alan Colmes acts as if he's never heard of it.They all treat anyone who even brings it up as "Tin-foil hat wearing nut-jobs",and yet,as I said.It's even admitted by the very people who take part in these "rituals"! Watch how David Gergen (Former advisor to 4 different Presidents and regular on The Fox News Channel) reacts to Alex Jones asking him about The Bohemian Grove,and the "mock" human sacrifices...

David Gergen FREAKS OUT when asked about "The Bohemian Grove"!

You must ask yourself.Why would all of the major news orginizations make anyone who asks about it out to be "nuts",and play "twilight zone" music in the back ground,continuously interupt those who ask about it,and/or outright deny it even exists altogether? It is because those that partake in these rituals claim to be christians and catholics,and they know that all of us TRUE christians would be outraged,because the word of God tells us:


"Thou shalt have no other gods before me"

"Thou shalt not make unto thee any graven image"

The bible also tells us:

"Thou shalt not lie with mankind,as with womankind:it is ABOMINATION" (Leviticus 18:22)

"If a man also lie with mankind,as he lieth with womankind,both of them have committed an ABOMINATION" (Leviticus 20:13)

And for those of you who think "Oh well,that is (Old-Testament) times"...

"And likewise also the men,leaving the natural use of the woman,burned in their lust one toward another,men with men working that which is unseemly,and receiving in themselves that recompence of their ERROR which was meet" (Romans 1:27)<----NEW TESTAMENT!

These videos on this site (and my others) PROVE that we are living in "The Last Days"! (For it was prophesied in Revelation 9:20 that mankind would STILL be committing such ABOMINATIONS in the "End Times",AND these videos prove that ALL of the major news orginizations are "controlled" (Bought and paid for) and that they are "ordered" to respond the way they are told to respond to questions about "The Bohemian Grove" and other important subjects such as "The New World Order".

Our Presidents father announced "The New World Order" on 9/11/91 (Exactly 10 years to-the-day before the tragic events of 911)-(Bill Clinton,Dan Quayle,Gorbichev,and many others also talked about the NWO) and yet if you bring it up on any news orginization,or radio show they will treat you the same way that they treat anyone who brings up "The Bohemian Grove".You must ask yourself "Why"? If none of this is true,then WHY WOULD THEY ACT THAT WAY? WHY would THEY call people "Nuts" who bring it up? Or WHY would THEY pass all of this off as being mere "Fun and games"? (When Almighty God see's it as an ABOMINATION!) Or WHY would THEY (in MOST cases) outright deny that "The Grove" even exists (When I have just PROVEN to you that it DOES EXIST!)...
Is it because it's actually MUCH worse than we ever imagined? That the so-called "Mock Human Sacrifice" is indeed a REAL HUMAN SACRIFICE!?!?!


"Who-WHO will watch The Watchmen"???

The Mystery of Molech II - The Bohemian Grove

Click here to help me TEAR DOWN THE GROVE!

"For he took away the altars of the strange gods,and the high places,and brake down the images,and CUT DOWN THE GROVES" -  II Chronicles 14:3 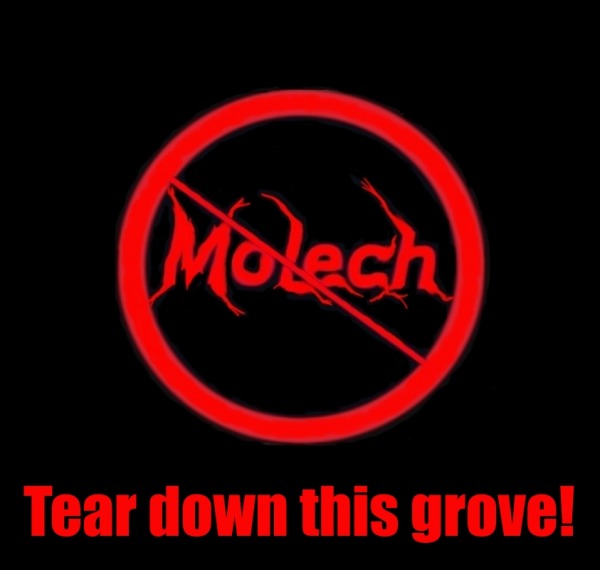